Best diesel cars in India under 10 lakhs - Know all about them! - All About Buying & Selling of Used Cars, New Car Launches

Best diesel cars in India under 10 lakhs – Know all about them! What is the fascination about driving four wheels and cruising along the road?

It’s the ideal way to commute distances and scale heights with a motor engine under the saddle. Cars have developed miles in the last few decades. Due to the ease of motorized four wheels, cars have become a crucial part of everyday life. The most common fuel used to run the engine of these motorized vehicles include petrol and diesel.

Here are some of the best diesel cars in India under 10 lakhs which you can bring home:

Maruti has been an overall contender among car manufacturers in India. The Maruti Suzuki Swift is one of the most successful hatchbacks to come out of the brand’s manufacturing plant. The ‘Swift’ is powered by a 1197cc engine which generates a maximum power of 61Kw at 6000rpm. And maximum torque of 113Nm at 4200rpm. The 1248cc engine generates maximum power of 55.2Kw at 4000rpm. This engine generates a maximum torque of 190Nm at 2000rpm. The Maruti Suzuki Swift carries an aggressive front grille, LED projector lamps, LED rear combination lamps and ORVMs. Inside the cabin, this car is embedded with steering mounted controls, dark tone upholstery and smart infotainment system. On the safety front, Maruti Swift comes with  ISOFIX mounts, dual airbags, ABS with EBD and engine immobilizer. Tata has made tremendous efforts to upmarket their design philosophy. Present day Tata cars are more futuristic looking and present a delightful array of features and specs. The Tata Tiago is one of the best diesel cars in India you can buy. Powered by 1199cc Revotron 1.2L 3 cylinder with a multi-drive petrol engine, Tiago generates a maximum power of 85ps at 6000rpm. The 1047cc Revotorq 1.05L 3 cylinder with multidrive: Eco and city mode diesel engine generates a maximum power of 70ps at 4000rpm. This engine generates a maximum torque of 140Nm at 1800-3000rpm. The exterior of Tata Tiago is studded with signature grille, 3-dimensional headlamps and ORVMs. Inside the cabin, Tata Tiago features an all-black interior, body-hugging seat bolsters and steering mounted controls. The third car on our list of best diesel cars in India under 10 lakhs is the Maruti Suzuki Baleno. Joining the Maruti’s portfolio in recent times, Baleno is one of the best diesel hatchbacks in India. Under the hood, the Maruti Baleno is powered by a 1197cc petrol engine which generates a maximum of 62Kw power at 6000rpm. This engine generates a maximum torque of 115Nm at 4000rpm. The 1248cc diesel engine generates a maximum power of 62Kw at 6000rpm. This engine generates maximum power of 55.2Kw at 4000rpm and maximum torque of 190Nm at 2000rpm. Bolano is designed to be a premium hatchback with external features such as LED DRLs, body coloured ORVMs, chrome accent front grille and projector headlamps. Inside the cabin, Baleno features dark tone environment with steering mounted controls, multi-information system and metal finish all around. The safety features on this hatchback include front disc brakes, auto headlamps, fog lamps and ISOFIX mounts. Amaze is the only sedan vehicle on our list of best diesel cars in India under 10 lakhs. With the latest variant entering the market in recent times, Honda Amaze carries promising persona around it. The two engine options available on Honda Amaze is a 1199cc petrol engine and 1498cc diesel engine. It is powered by Honda’s 1.2-litre petrol engine offering 90PS and 110Nm, an improved version of the earlier car’s motor. The diesel engine is the 1.5-litre engine. Outputs for the diesel stand at 100PS and 200Nm for the manual and 80PS and 160Nm for the automatic version. The latest version of Honda Amaze looks sleeker due to the presence of signature Honda grille, LED lights, front fog lamps, shark fin antenna and ORVMs. The interiors of Honda Amaze include dual tone upholstery, steering mounted controls,  push button start stop and automatic air conditioning system. 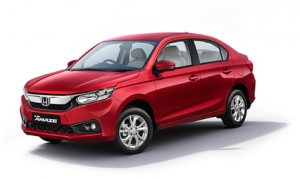